A first impression of Notion

I’m a sucker for any notetaking system or app that claims it will help me organize the chaos rattling around in my brain, but I’m perpetually disappointed. I’ve found that I need something simple enough to just jot down some free-form notes, but I have the mind of an engineer and an encyclopedist: it yearns for footnotes, relational databases, hyperlinks, and filtering and sorting. I also need something pleasant to look at—although I spend much of my time staring at monospace text in a code editor, when it comes to planning and notetaking I prefer the elegance of a well-crafted font and copious whitespace.

I feel like I’ve tried just about everything, handwritten and digital. I like handwritten notes because I feel that writing things out helps me remember, and because it feels more polite and attentive to not be typing on a laptop in a meeting (especially meetings with just one other person). But handwritten notes quickly become disorganized and difficult to refer back to, and can’t easily be edited or reordered. The pages quickly become scrawled with strikeouts and arrows, irritating the part of my brain that wants a tidy, well-kept reference. Attempts to resolve the disorganization with systems like bullet journaling and GTD have been largely unsuccessful—they work well for task management, but I lose the plot once they become intermingled with the notes, planning documents, grocery lists, and other detritus that inevitably winds up in whatever notebook I have at hand. I also handwrite much more slowly than I type, which is frustrating when I’m trying to get my thoughts out quickly or keep up with notetaking in a meeting.

I’ve tried digital solutions as well. .txt files in Sublime Text, more full-featured rich text editors like Google Docs and Paper, notetaking systems like Evernote, and to-do apps like Todoist. A lot of these solve for one or a few things I need, but not all: Paper satisfies my need for beautiful UX and cross-reference between documents; Todoist gives me checkboxes and task reminders. But I inevitably hit limitations: it’s difficult to organize Paper docs hierarchically (or non-chronologically); Todoist doesn’t provide much in the way of support for notetaking; Google Docs winds up with my notes split between my work, personal, and Wikipedia accounts and can be glitchy when trying to switch.

However, I recently stumbled across Notion, which is a member of a category of applications that I don’t have a good name for. It sits among Airtable and Coda in what a Google search tells me is “modular productivity software” or “work management software”, neither of which I think is a particularly descriptive name. I will say that I’ve never used Airtable or Coda in any serious way, so I can’t give a great reason for why I picked Notion over the other two; perhaps I’ll try them some time.

I signed up, transferred my to-do list from my paper notes into a document, and was astounded with how easily the program kept up with my needs and wants as my workflow began to evolve. 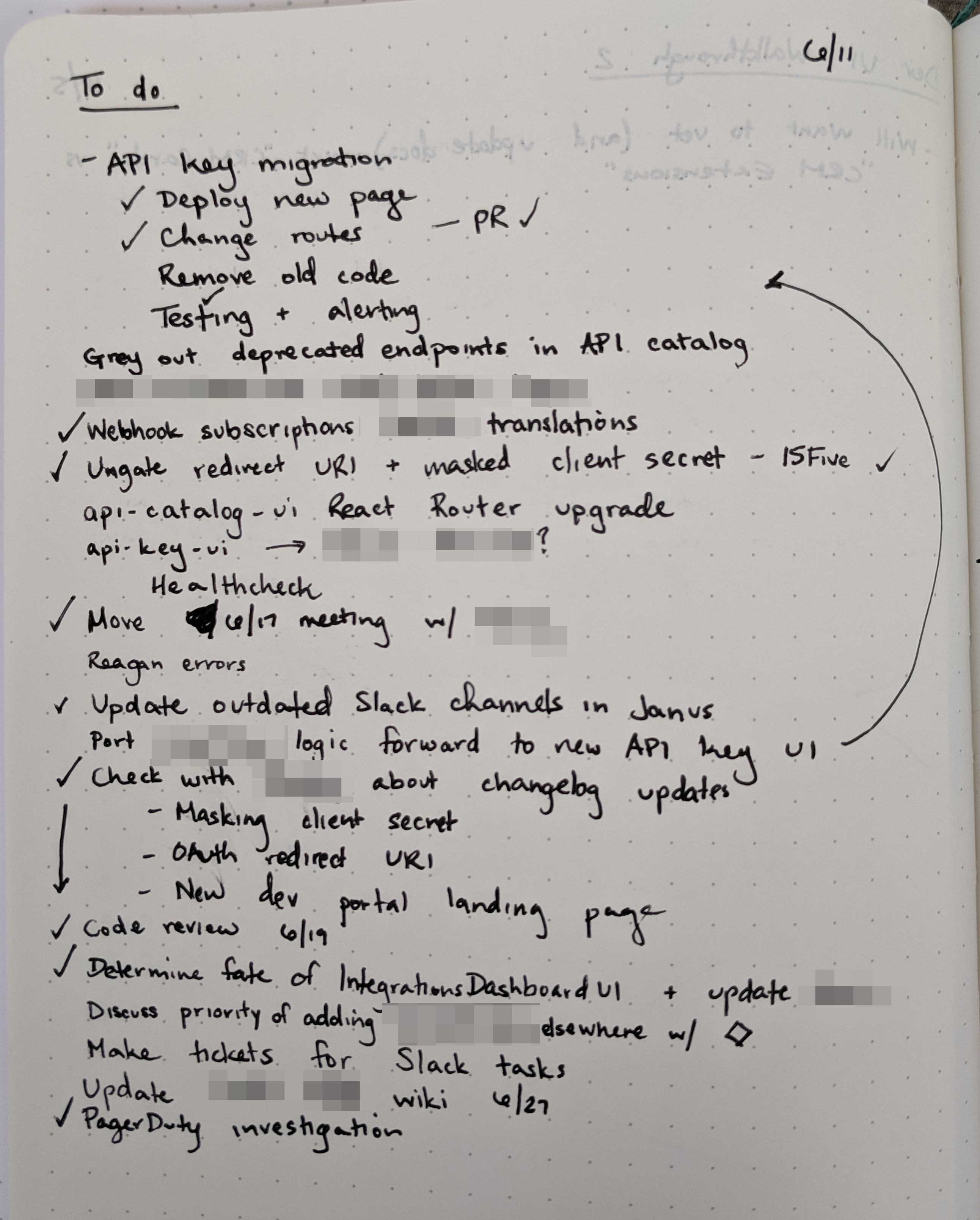 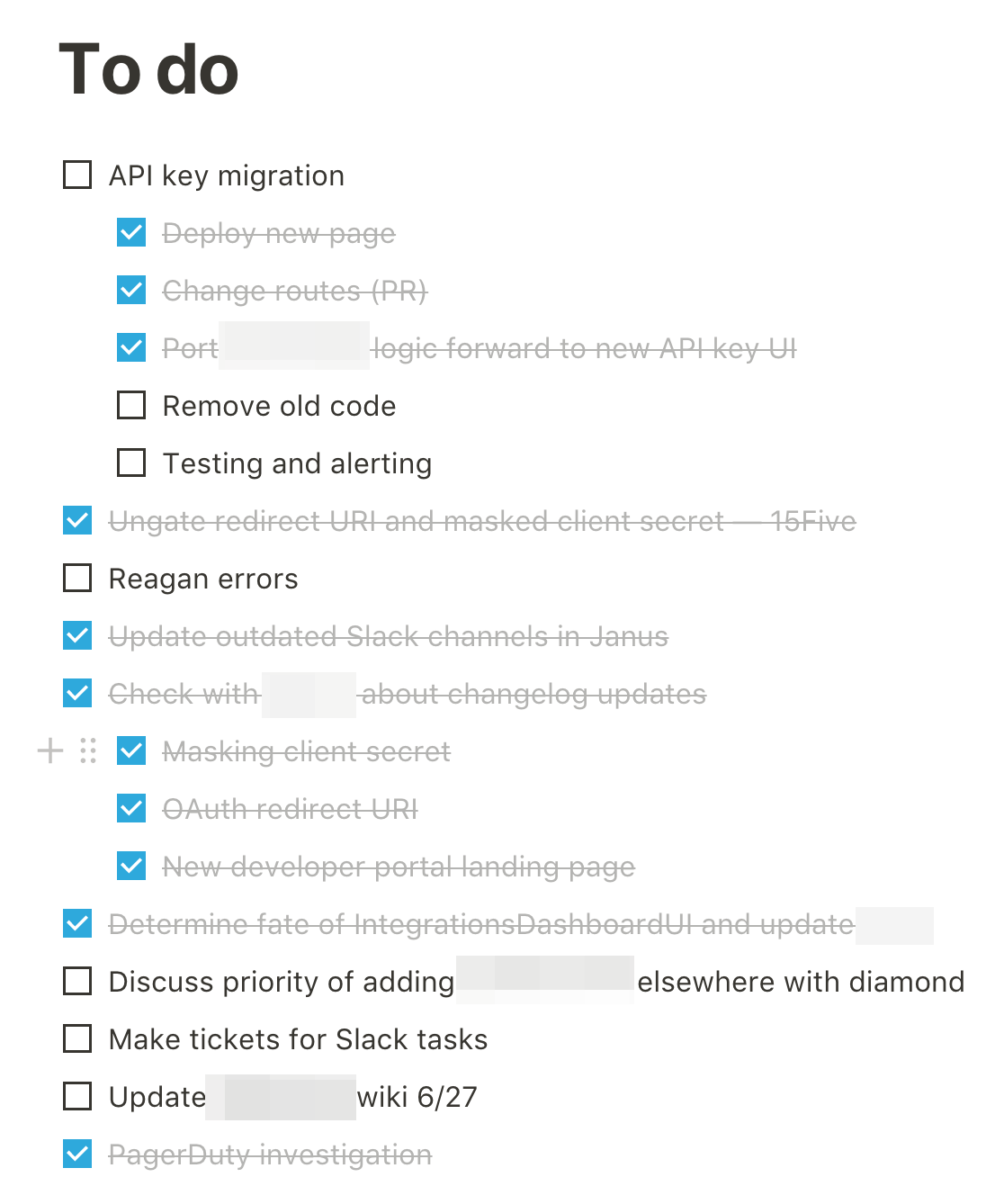 I was able to copy over my to-do list with only the items that I wanted to retain. Old tasks that were no longer relevant or had been moved to shared team planning boards could simply be removed, while I could keep tasks that I had completed but wanted a record of still. This is one reason I prefer a digital to-do list in general.

I added a header image and a cute emoji that is used both as a header icon in the document but also as a marker alongside the page in the document index. Nice to look at, and the icon functionality is really useful for distinguishing pages at a glance.

A few of my tasks either had deadlines, or had to wait until a specific date. I quickly realized I could tag them with a date right in the to-do list, and set up a reminder for a date and time. Awesome.

After using Notion for more than a day, I realized that I had the ability to split my to-do list up by days—leaving completed tasks on the day I’d checked them off, and moving further tasks forward to the next day or a “future” column. Notion made this so easy—all I had to do was select the block of tasks and drag it to the side to create a new column. I also replaced my emoji icons with some elegant, minimalist ones I found on icons8.com. 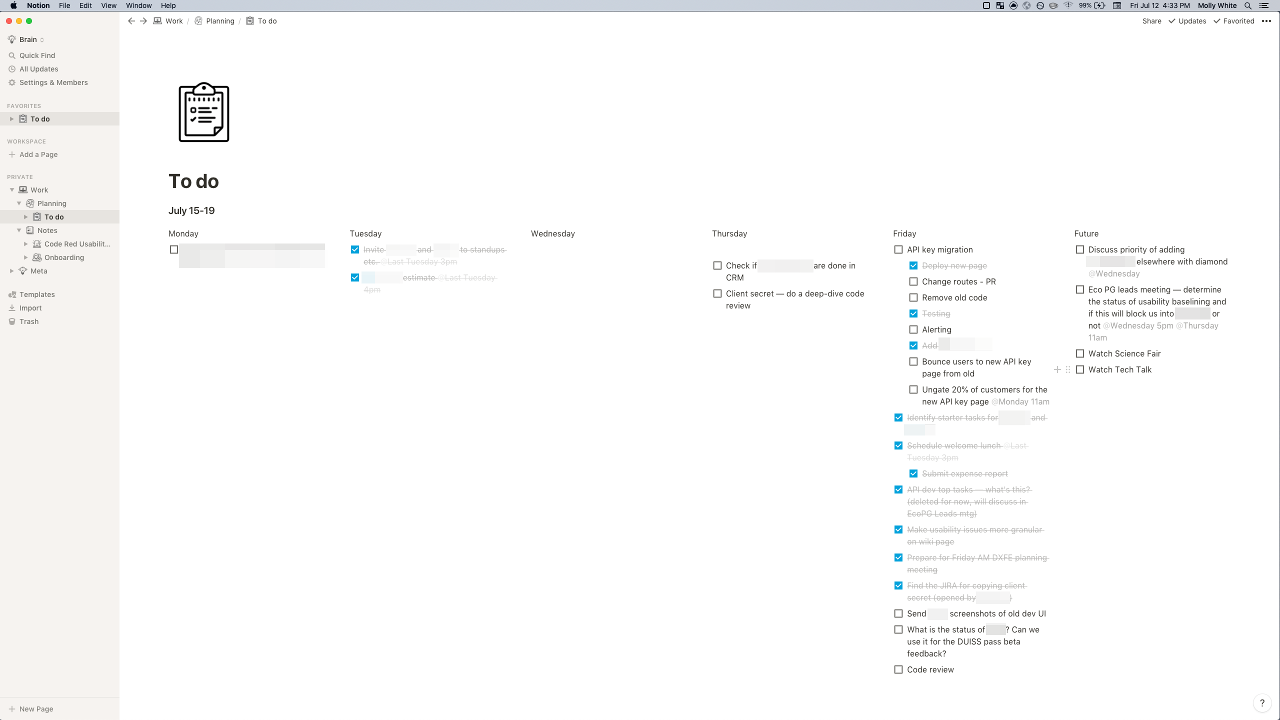 With this shift to a week-formatted to-do list, I realized that it could be very useful to retain old lists going back in time, migrating each one forward each week. Could I do that in Notion, in an easily indexable way? Of course.

This to-do list displays well on my giant monitor at work, but how will the horizontal layout look on my phone if I need to edit something away from my desk? 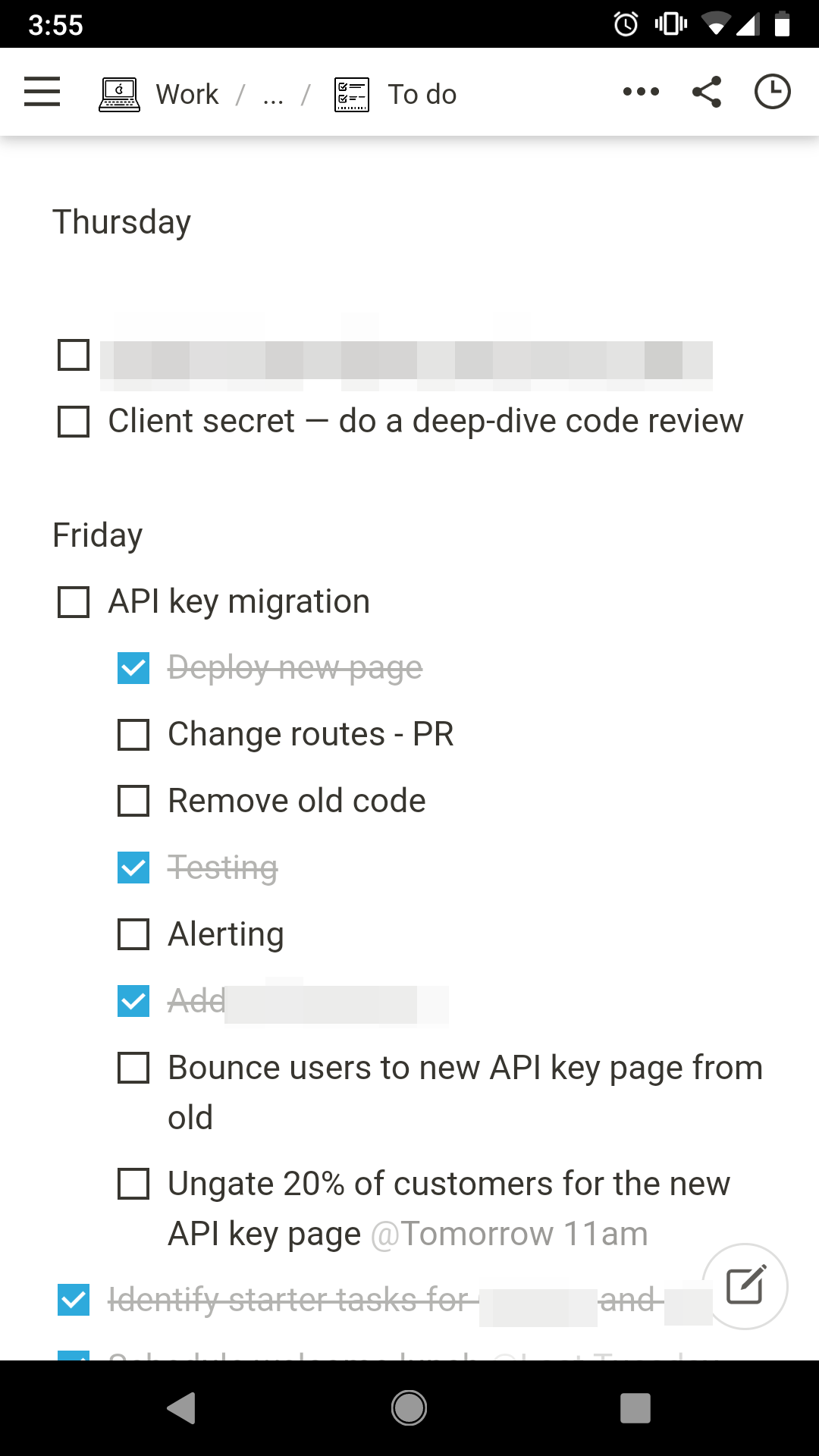 It reflows into a mobile-friendly column layout, no sweat.

All in all I am incredibly impressed with Notion so far. I’ve only just begun to try using it for more than just basic documents and to-do lists, but am excited to try using some of the more powerful features. I think it will be very useful at work, especially with how many notes I find myself taking now that I’m managing a growing team, but I also see a lot of potential for it in my personal life and hobbies.